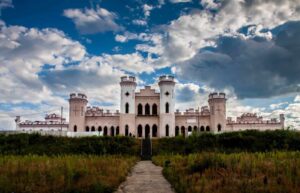 The Puslovskys Palace on the outskirts of the town of Kossovo (or Kosava) has no analogues in Belarus.

Its neo-Gothic style of the middle of the 19th century is absolutely unique.

It consists of twelve towers that rise above the two-story building of the palace itself.

The towers have dentate peaks and resemble the structure of a dungeon in medieval castles.

There is also an opinion that the number of towers of the castle is connected with the months of the year, and the battlements on the tops – with days of the year.

Well, we will tell you later about the numerous legends and myths connected with the Puslovskys Palace in Kossovo, but let’s start with some historical information.

HISTORY OF THE PUSLOVSKYS PALACE

It is worth noting that the history did not pass by the palace and didn’t preserve it in a totally original look. Construction began in 1838 and lasted about eight years. The palace has changed many famous owners, after earl Puslovsky, the original owner of the property, lost it in cards.

The palace suffered the greatest decline in the war years. During the First World War, the castle was looted and damaged. During the Great Patriotic War in 1944, the complete castle was on fire that destroyed all the valuables that had been preserved by that time. 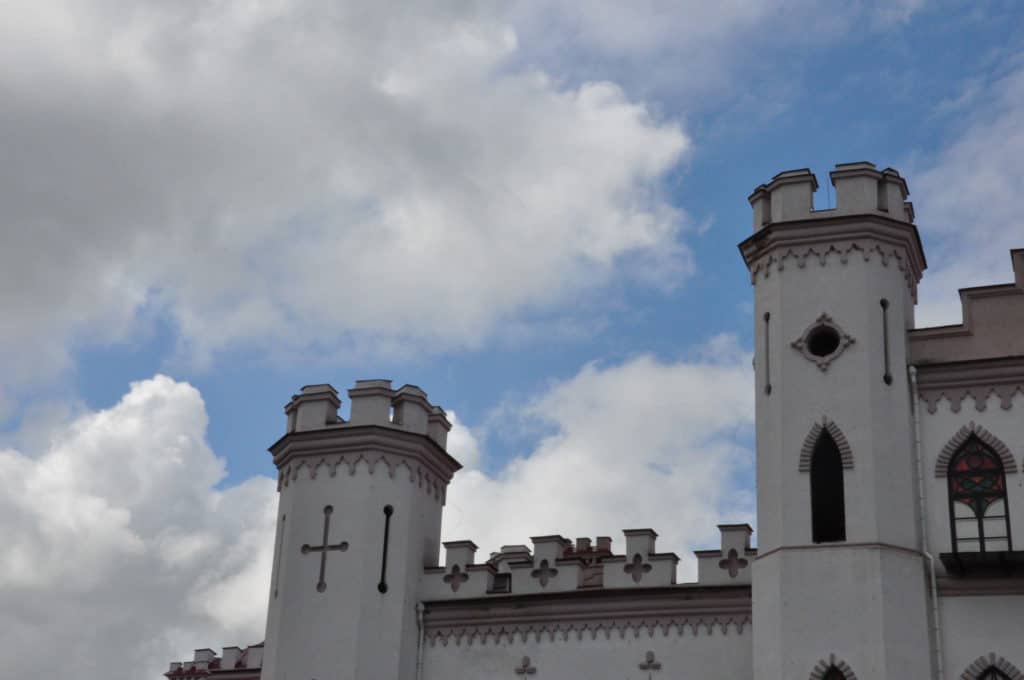 However, since 2008, Kossovo Castle begins its new history from the moment of the approval of its restoration. Most recently, in November 2017, the restoration was completed, and Puslovskys Palace was opened for visitors. Revival of the palace was embodied in the opening of the museum, restaurant and hotel, which restored its former glory.

PLACES TO VISIT IN THE CASTLE SURROUNDINGS

The surroundings of the castle also include several points of interest you need to visit. Some of them include the largest terraced park in Belarus and a greenhouse with exotic plants.

Also interesting to visit is the museum-estate of the famous Belarusian revolutionary Tadeusz Kosciuszko. Learn how the national hero of five countries (Belarus, Lithuania, Poland, France and the USA) used to live in his childhood.

Look at this short overview video of Kossovsky Castle, and then we will tell you about the 7 popular legends of the Puslovskys Palace in Kossovo, and also explain you how to get there and where to stay.

Overview of the Puslovskys Palace and Surroundings

LEGENDS AND MYTHS OF THE KOSSOVSKY CASTLE

Each castle, especially in Belarus, has its own interesting legends, as well as mystical stories, and myths associated with hidden treasures. The Palace of Puslovskys also abounds with them, so here are 7 of them.

Puslovskys Palace attracts more and more attention of tourists every year: thousands of travelers from different countries wish to see this majestic and unique architectural monument of the 19th century.

We also recommend you to visit it. To help you plan your trip, here is information on how you can visit it and where you can stay near Kossovo Castle.

How to get to Kossovo Castle 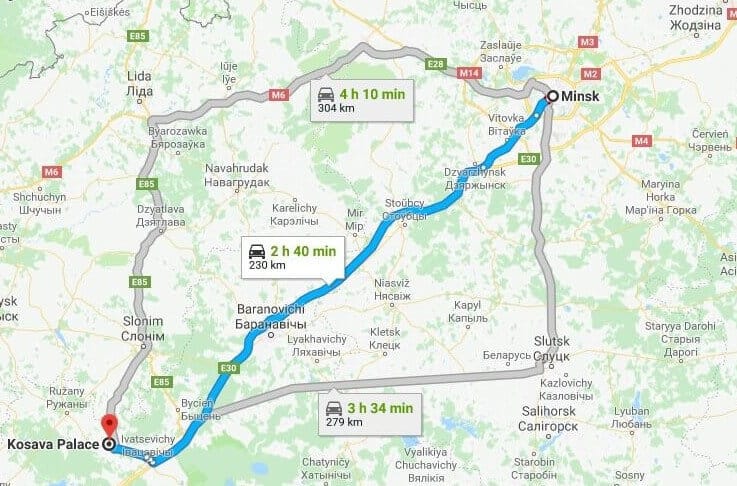 You can reach Kossovo Castle either by public transport or by car.

Other castles are not far away, so the car is the perfect mode of transportation to visit all them. Find out more about car rentals in Minsk here.

If you do not have a private car, you can go to Ivatsevichi by intercity bus or train and then take a suburban bus to Kossovo (towards Ruzhany).

Learn more about the transportation system in Belarus.

Where to Stay near the Castle

Kossovo is a small town in which has nothing interesting to visit except for the Puslovskys Palace and its outskirts, so it does not abound in the variety of hotels. Nevertheless, there are several hotels and farmhouses near the castle, where you could stay.

To find the most suitable hotel where you can stay near Kossovo Castle, simply enter ‘Puslovsky Palace’ in the box below and select the accommodation option that you like best.
a

After the opening in November 2017, Kossovo Castle started to work by the schedule of the nearby museum of Tadeusz Kosciuszko, that is, Monday and Tuesday are days off, and between Wednesday and Sunday it is open from 10:00 to 17:30.

To visit the Palace of Puslovskys, an adult will need to pay 3 Belarusian rubles (on 15 May 2018, 1 euro=2.4 Belarusian rubbles), and the cost for pensioners and students is 2 rubles.

The entrance to the Museum of Tadeusz Kosciuski costs 1.28 rubles for adults and 75 cents for students and pensioners.

Preschool children can visit both buildings for free.

Conducting individual excursions around the castle has not yet resumed, but independent travelers can already visit Puslovskys Palace on their own.

Excursions to the Kosciuszko Museum are held, and in the case of groups from 5 to 25 people, the cost of the excursion for an adult is 7.7 rubles, for students, schoolchildren and pensioners – 5.8 rubles, and for preschool children 4.6 rubles.

This was our full review of the reasons why it is worth visiting the Puslovskys Palace (or Kosava Castle) with all the useful information that you need to know before visiting it. Have a great trip!

Read also about the nearby Mir and Lubcha castles.

The main image taken from Vezha.info