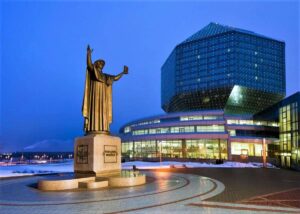 If you were planning to visit Belarus, you probably saw some exciting guides of famous travel websites and at the same time, terrible stories from journalists onnews portals.

Both cannot reflect the genuine picture of our country. That is why we decided to ask 4 travel bloggers who visited Belarus to share their stereotypes they had before and opinion about Belarus after their visit.

Going to Belarus was an obvious choice for my travel destination since I love Soviet architecture and iconography but what I discovered over there was more than that! 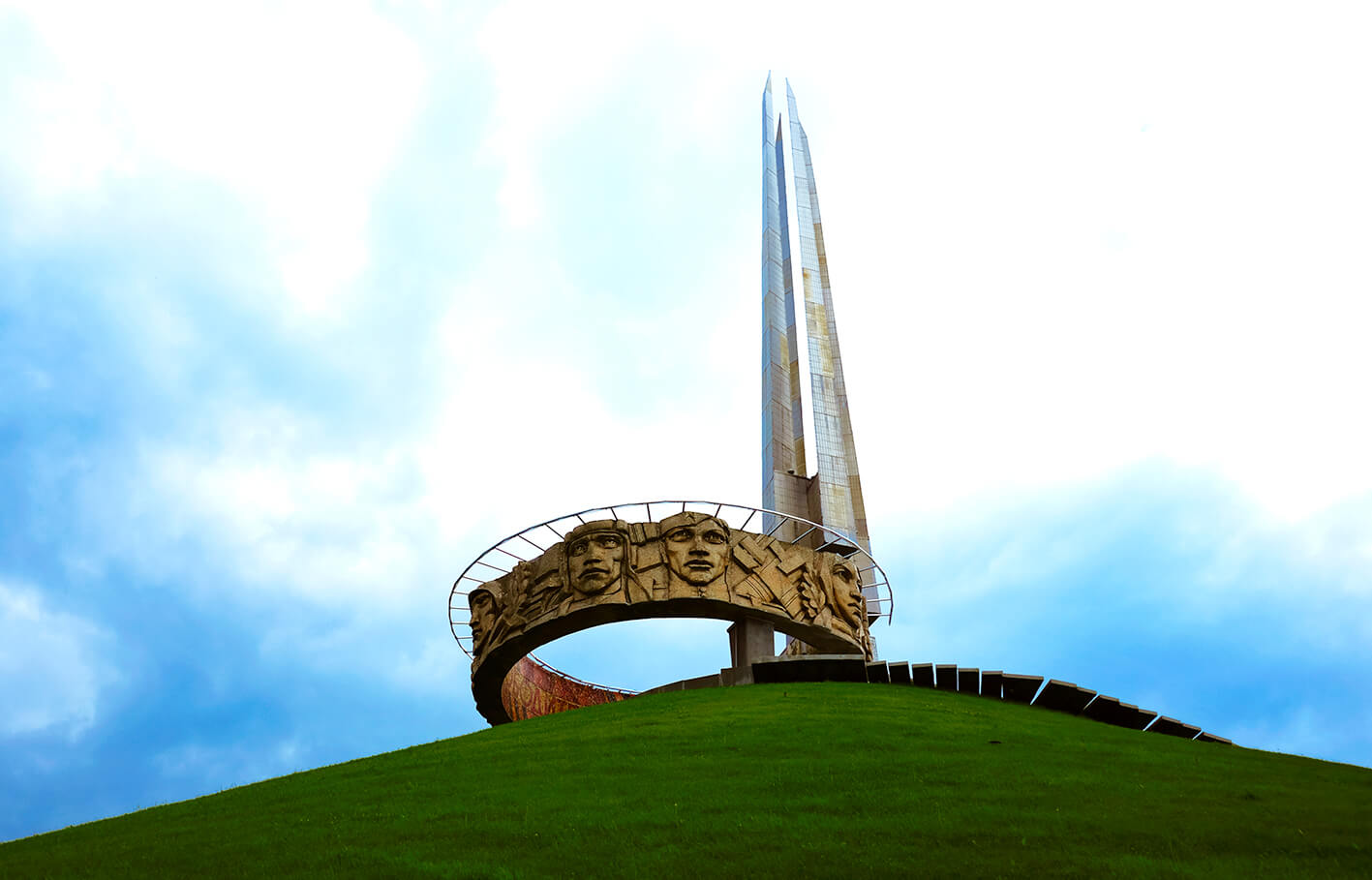 I spent 5 days in Minsk taking advantage of the free 5 days VISA ( now I understand it has been extended to 30 days).

Minsk was a great surprise with so many things to see and do and,during my stay there,  I have met super friendly and welcoming people that made me like the city even more.

There are 3 places that I absolutely loved during my trip in Minsk, Belarus.

Fantastic 5 days in Belarus and looking forward to going back in the future to spend more time there and see more places like Brest.

Ron and Michelle from Leggingit, Australia

When we visited Minsk in Belarus in 2014, we actually had no idea what expect but thought it would be a bit like still being behind the iron curtain. What we discovered was a vibrant thriving city that really was equal to any we had visited in Eastern Europe. 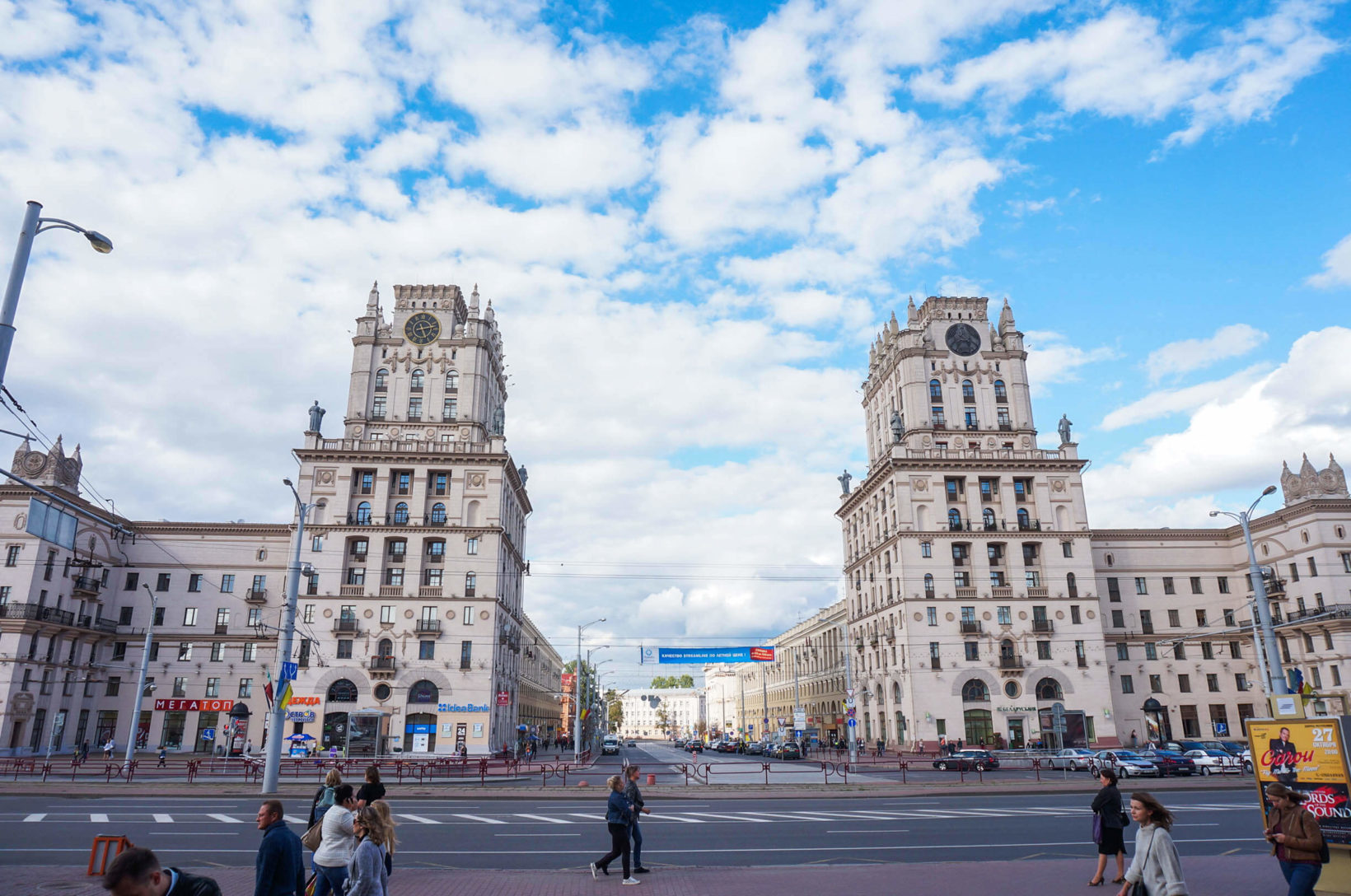 When we arrived by train, we were greeted by a stunning brand new modern station so looked for a tourism office where we could find a map and explore the city. The only map we could get was not in English, which we used to find out way around.

First stop was to find somewhere to eat, we found a lovely place which to our surprise was playing Australian Rules Football on the TV, the food was a good price and good quality. On our wander around the city we saw many things that the map led us to but of course as nothing was in English so we actually had no idea what we saw.

We really enjoyed our day there and would love to return to see more of Belarus. Our one tip would be to get a decent guide book or even book a guide, so you can really absorb the city and what it has to offer.

Comment from Visit-Belarus: Many things have changed since 2014, and it became much easier for a foreigner to navigate in Minsk

Till recently there was quite little information about Belarus, so people unwillingly made impressions about the country based on western movies that choose Eastern Europe for shady scenes; stereotypes about Soviet Union or politics.

When I visited Minsk for the first time I was pleasantly surprised to see a smartly planned European capital. This was one of the cities where I’ve actually enjoyed walking around the city throughout the day. 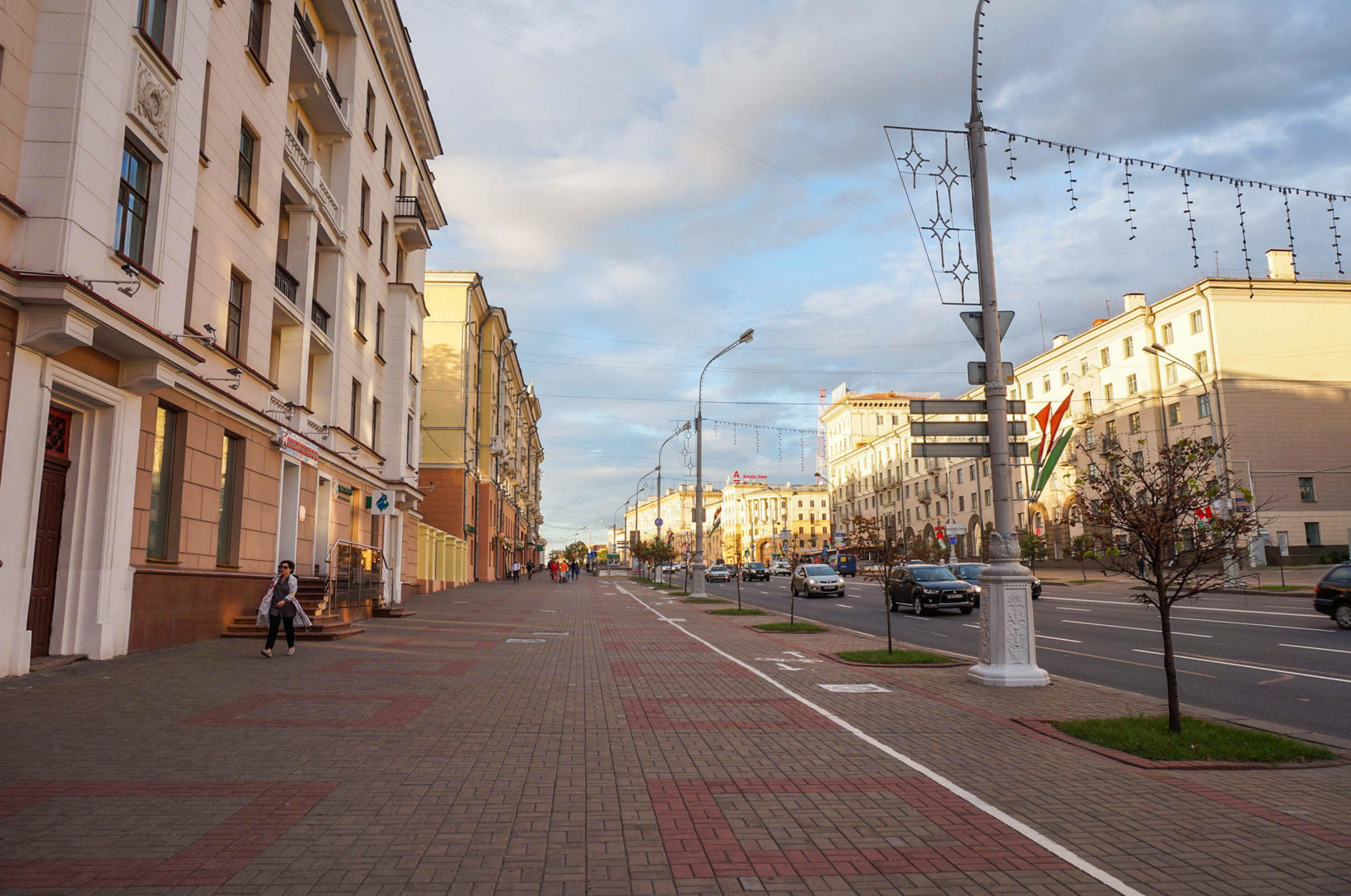 There are bicycle routes, pedestrian pathways, abundance of parks and green areas with benches and dustbins. There are regular pedestrian crossings and traffic lights. The roads are in great condition and I also couldn’t help noticing the level of cleanliness around. While walking through the broad streets of the capital, you can actually enjoy the architecture without commercial banners and ads.

There are different problems that Belarus is facing (which country doesn’t?), but people should definitely stop perceiving post-soviet capitals as backward cities. We all live in a 21st century and Eastern Europe has taken tremendous developmental strides in the recent past ?

I was thinking Minsk would be a rough city with buildings that looked like they could fall over at any minute. I also expected people to be playing hockey everywhere.

When I got to Minsk I was in underground bars, visiting hipster cafes that wouldn’t look out of place in Portland, and getting around using the subway that rivals Moscow’s. The buildings, while some residential blocks weren’t the best, were modern and looked like any other major city. The National Library doesn’t win a lot of nice comments, I think it looks great!

I did manage to get to a premier ice hockey match and was surprised and the lack of enthusiasm for the match. There was a low-key build-up to the match at the Molodechno Ice Palace and even with tickets less than $5, there wasn’t a full arena. 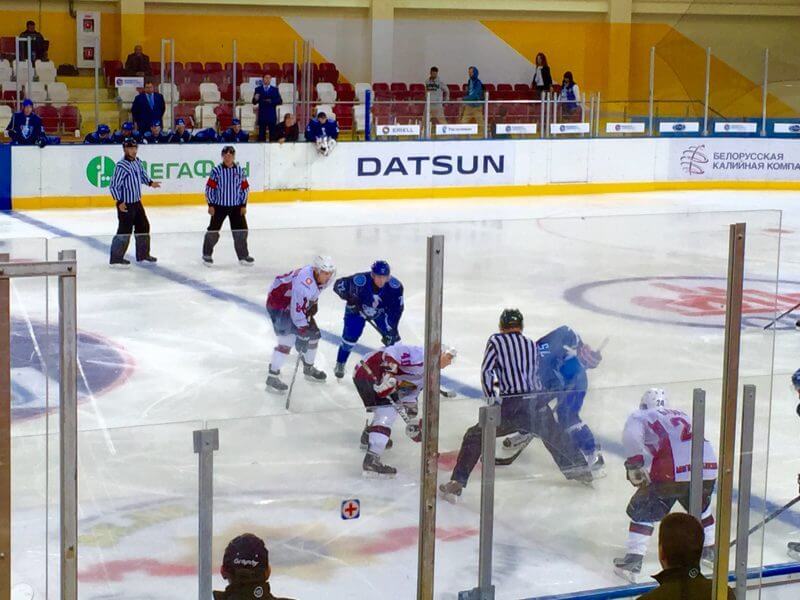 I guess this is where the relatively poor factor comes in, there was minimal advertising around the stadium and apparently, the Government assists with funds to keep the league running even though it’s the best in the country. Still had a great time though and at the end of the day, it’s just sport.

Before my trip, I was aware of several Belarusian stereotypes. And while there are some stereotypes that are true, others are quickly fading into history.

One of my biggest surprises when I visited Belarus is how “Soviet” it really feels there. Growing up in the United States, terms like “cold war” and “Soviet” conjured up very specific images.

After the cold war in the 1990s, most old Soviet-era countries opened up and modernized themselves tremendously. Belarus did not. 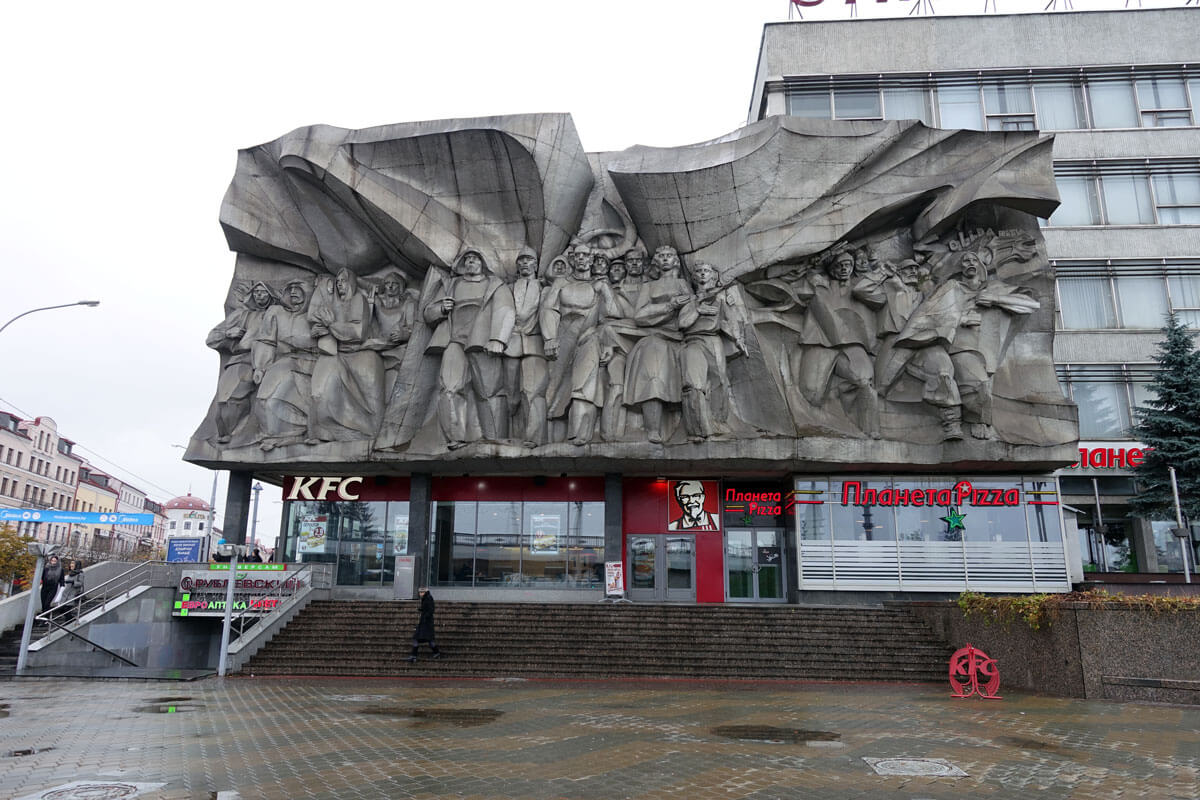 Minsk and the rest of Belarus remained mostly closed off from Western influence until recently. Here, you can still find huge grey concrete architecture, populated by people seemingly fearful of defying the rules. While this means that crime in Minsk is relatively low, even minor offenses, like jaywalking or taking photos in public places are forbidden and often reported. While I was taking a video clip inside a Minsk subway station, for example, a local woman reported me to the police.

It feels very regimented and controlled.

On the other hand, not everything conforms to old stereotypes. Young people crave change, and most of them learn and speak English pretty well. Minsk is the home of one of the most advance software developer communities in Europe. KFC fast food joints, iconic of capitalism in many places, have sprung up in many corners of Minsk. Foodie culture is becoming quite common. You can check out some great Belarus food in our DIY Belarus Food Tour Guide.

I was only there for a short time, but would love to explore more of Belarus. It’s worth the trip.

Comment from Visit-Belarus: Take into account that Halef visited Belarus in November, which is not the best time to travel here. It’s already not warm, and still not snowy.

They were stereotypes and opinions of Belarus from travel bloggers who have seen an abundance of beautiful places around the world. They found many things that interested them and had great impressions of Belarus. Over time, we will continue adding more reviews of Belarus to this post to let you have a right idea of the country. Have a great trip!